SILVER SPRING, MD, January 17th, 2020 – As we begin 2020, we as a nation, including the Association of University Centers on Disabilities (AUCD), will be celebrating the 30th anniversary of the signing of the Americans with Disabilities Act (ADA). This landmark civil rights legislation impacts the lives of millions of Americans with disabilities and protects against discrimination and ensures and improves access to opportunities afforded to all.

“The ADA cemented in federal law the civil rights of Americans living with disabilities. These expectations have served as a new foundation of inclusion for more than a generation. We hope you’ll join us in sharing your stories and celebrating three decades of its success during 2020,” said John Tschida, Acting Executive Director of AUCD. 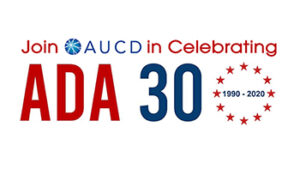 The ADA was signed into law on July 26, 1990. Throughout the year and on the ADA Anniversary, AUCD will celebrate this landmark event as a way of bringing attention to the important work that has been done to promote equal opportunity for people with disabilities and to highlight the work that is yet to be done. We honor our leaders in the disability community who worked tirelessly for the passage of the ADA and look to our emerging leaders, many of whom have grown up after the ADA became law, to carry on the mission, hope, and vision of the ADA.

Since the ADA, individuals with disabilities are protected from discrimination in all areas of public life including jobs, schools, transportation, and all public and private places that are open to the general public. Significant advances have been made to ensure people with disabilities live and work in the community with appropriate supports and services. The AUCD network of interdisciplinary centers in every state and territory have been instrumental in these efforts. They have revolutionized change in their states and transformed systems because of the ADA. AUCD is a network of leaders with rich stories to share about the real impact of the ADA across the nation.

We applaud these trends while also recognizing that many people with disabilities continue to face barriers. Many challenges remain, including:

AUCD believes that everyone with a disability deserves to be in the community where they can live the life they choose with dignity. As a nation, we must enforce the core civil rights protections of ADA. Congress must support legislation that allows individuals eligible for long-term services and supports under Medicaid the right to individualized services and supports, such as:

AUCD joins with other members of the civil rights community in celebrating the progress our society has made in the 30 years since the ADA and is committed to continuing the ongoing work needed to fulfill its promise of full inclusion for all members of all communities.

Photo courtesy of the Presidential Libraries of the National Archives.